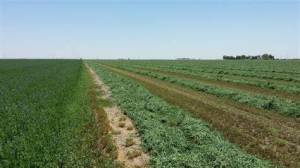 PROGRESSIVE FORAGE – Glyphosate-resistant alfalfa has become a popular option for many growers throughout the U.S. for growing pure alfalfa. It offers improved flexibility in weed management, as well as overall cleaner hay and silage. Because growers can control a wide range of weeds using this technology, many fields are more easily managed and less stressful to control.

Throughout the U.S., many producers prefer to grow mixed stands of alfalfa and cool-season grass (or grasses) for many reasons. They often have improved production over alfalfa or grass grown in monoculture; they are more palatable than pure alfalfa; they increase erosion control; and they also increase overall forage quality. One of the common questions that is frequently asked is how can glyphosate-resistant technology be incorporated into stands that are intended for grass-alfalfa mixtures? You don’t want to get rid of the grass, so what is the point of using glyphosate-resistant varieties?

The main benefit in using glyphosate-resistant alfalfa varieties in mixed stands is to improve weed control, particularly in that first year by growing a pure alfalfa stand and then interseeding grass into a clean alfalfa field in the fall of that year or spring of the following year. Initially planting a pure stand of glyphosate-resistant alfalfa will allow for excellent weed control, creating a great environment to interseed your desired grass species into. Additionally, by growing monoculture alfalfa for the first year, producers are left with a season of very high-quality forage. This can be fed to high-producing animals or mixed with lower-quality forage for animals with decreased production needs.

We all know that controlling weeds in a mixed alfalfa-grass stand is troublesome at best, with limited options available to control weed infestations. Cleaning up the fields before establishing a mixed stand will alleviate some of the headaches in following years. Cleaner fields will allow for more productive stands, with higher yield and quality. And if rotating from an annual crop, it will still allow for year-round weed cover prior to establishing that mixed stand.

Another common practice in alfalfa establishment is to use a companion crop such as oats or wheat to decrease risk of erosion during establishment. This can work very well with the glyphosate-resistant technology, as the companion crop can easily be terminated once it reaches about 6 inches in height, allowing for alfalfa establishment without a significant negative impact on production. Then producers can still interseed the desired grass the following year, without having to worry about weeds or soil loss.

What about just using conventional alfalfa varieties and approved chemistries that first year? The unfortunate reality is that many chemistries approved for use in conventional alfalfa, such as imazethapyr and imazamox, may offer good weed control, but often at the cost of alfalfa production. Studies in Wisconsin and Minnesota found an average of a 0.2-ton-per-acre reduction in alfalfa production due to the use of conventional herbicides. And this effect can be mimicked for each cutting that the herbicide is applied to.

When evaluating the cost effectiveness of using Roundup Ready alfalfa compared to conventional, we can realize a large cost savings in the seeding year alone. Even if we expected half of the above number, only a 0.1 ton per acre increase in yield, by using glyphosate instead of conventional herbicides, then that could amount to approximately a $37.50 increase in profit per acre. This number assumes an average seeding year production of 2.5 tons per acre and hay valued at $150 per ton. Additionally, we would expect an herbicide cost savings of approximately $12 per acre when comparing the cost of Roundup Ready to alternative chemistries. Even with Roundup Ready varieties costing $25 to $60 more per acre, this technology is still more than paying for itself in cost savings and increased production due to better weed management.

Utilizing glyphosate-resistant technology (like Roundup Ready) in a mixed stand can make a lot of sense for many producers. Even though there is an additional cost, it is offset by the added value of using the glyphosate-resistant product. However, care should still be taken to implement other methods of weed control, such as harvest timing management, to decrease risk of herbicide resistance. Utilizing best management practices, establishing a vigorous, healthy stand, harvesting before weeds set seed and decreasing introduction of weeds into fields via means such as equipment or irrigation water can help mitigate these risks.