Fertilization of tall fescue and smooth bromegrass pastures and hayfields

KSU AGRONOMY eUpdate – Much of the nitrogen (N) applied to tall fescue and smooth bromegrass hay meadows and pastures goes on in January or February in eastern Kansas, but there is still time to apply it now even though temperatures late this winter have been warm and the cool season grasses are greening up rapidly. The amount and timing of N depends on whether the field is hayed or grazed; how much, if any N was applied in the fall; the price of N and hay; and the growing conditions since last fall.

Normal N fertilization rates for established fescue and bromegrass hay fields are 90 to 120 pounds actual N per acre, or about 30 pounds of N per ton of expected yield. A summary of K-State N response data shows the average yields for unfertilized brome and fescue were about 1.4 tons of hay per acre, while maximum yields averaged 3.2 tons of hay with 140 pounds of N (Figure 1). 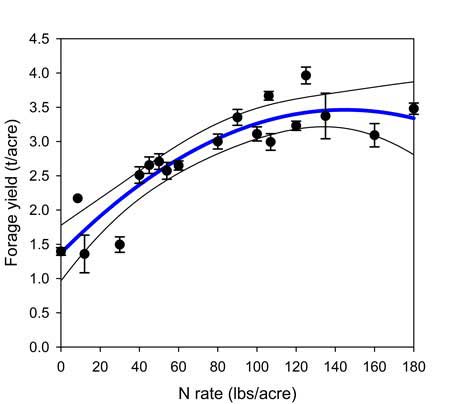 Protein levels will also be increased at the higher N fertilizer rates, assuming timely harvest. In cases where producers are relying on high-quality hay as their primary protein source, they will want to push N rates to the upper end of the recommended range.

Timing of N application is another factor to consider. While most growers apply all the N and any needed P and K for hay production in a single application in the spring, research in Kansas has shown that applying all the fertilizer in the fall will normally result in slightly higher yields, though the protein values will normally be slightly lower. Prior K-State research indicates that smooth brome responded to spring applications as late as April without effects on tonnage of dry matter produced and significantly greater crude protein levels than fall applications. Fall applications of N and P stimulate root growth and produce more tiller buds, resulting in more stems the following spring.

Under normal conditions, tall fescue and smooth bromegrass pastures that are grazed in both spring and fall should receive about 100 pounds total N per acre, with 60% applied in the winter or early spring and 40% of the N along with any needed P and K in late August or early September. So producers should plan on applying 60 to 70 lbs N per acre in late winter or early spring, starting as early as January in southeast Kansas or February in the central and northern parts of the state.

Both smooth bromegrass and fescue are efficient users of soil P and K. One of the reasons for this is the dense root system — two to three times more roots per unit of soil volume than corn or soybeans. As a result, these crops can grow and thrive at lower soil test levels than other crops commonly grown in Kansas. But both smooth bromegrass and fescue do remove about 12 pounds of P2O5 and 40 pounds of K2O per ton of hay, which will lower soil test values. Thus, these grasses will respond to P and K fertilization on soils with low or very low soil test levels. Recent work in northeast Kansas has shown response to applied P at soil test levels below 12-15 ppm. P and K application rates should be based on soil tests, as with most crops.

In any type of fertilizer management program for tall fescue and smooth bromegrass, whether for hay production or grazing, needed phosphorus and potash should be applied in the late summer or fall for best results, along with a light application of N. Research with smooth bromegrass and fescue production has shown that fall applications of N and P, while these cool-season grasses are still actively growing, will help the grass develop a good root system for the winter, and develop buds for new tillers the next spring. P and K applied in late winter or early spring won’t provide the same benefits.

One option for hay production not widely used is to apply all the N, P, and K needed for the following year in late fall, rather than early spring. Research has shown that the yields from a late- fall application are actually higher than from an early spring application, but the protein levels in the hay are slightly lower (a dilution of the N due to higher biomass production). The increased production from a late fall application is due to the stimulation of root growth and production of additional tiller buds.

One additional nutrient producers should be aware of for tall fescue and smooth bromegrass pastures or hayfields is sulfur (S). If the pasture or hayfield is receiving adequate nutrients and precipitation, but is dropping off in production, it could be deficient in S. Sulfur deficiency will cause a general reduction in forage production long before it results in visual deficiency symptoms. An application of S to a tall fescue or smooth bromegrass pasture or hayfield that is deficient in S can result in forage yield increases up to 500 to 800 lbs per acre.

Sulfur is taken up by plants as sulfate. If a sulfur application is needed to correct a deficiency in a growing crop, a sulfate-S source should be used, such as ammonium sulfate or gypsum. Elemental sulfur sources can be used if applied far enough in advance of crop uptake needs to allow soil organisms to oxidize the S to sulfate. This will normally take several weeks to months, depending on soil temperature and moisture.

To determine whether P, K, S, and lime are needed on tall fescue and smooth bromegrass fields, producers should consider soil sampling. The best time to sample is in the fall, prior to fertilizer application. However, soil testing can be done in the spring. Samples for a P and K soil test should be taken to a 6-inch depth. A profile S test to a depth of 24 inches should be used to evaluate S needs. Detailed information on collecting a representative soil sample from pasture/hay fields can be found in a previous eUpdate article: Issue 771, October 25, 2019 – “Fall testing of hay fields and pastures”.