Forage cover crop or fallow: How to decide

PROGRESSIVE FORAGE – By John Holman, KSU, for Progressive Forage. There has been great interest in cover crops in recent years for a number of reasons, but few scientific studies have evaluated cover crops in semi-arid regions (less than 20 inches of annual precipitation and greater than 40 inches of open-pan annual evaporation).

When comparing crop response across environments, one must consider both precipitation and evapotranspiration (water loss through both evaporation and transpiration).

In layman’s terms, an inch of precipitation goes a lot further growing a crop in North Dakota than in Arizona. These semi-arid regions rely on fallow to capture and store soil moisture for subsequent crops, and growing a cover crop in place of fallow can have a negative effect on soil water storage.

This is a point often overlooked by many, except those producers who have experienced reduced crop yields after having grown a cover crop. In fact, some cover crop advocates have gone so far as to claim “cover crops do not use water.” Even cactus requires some water.

Another term that has been used loosely in recent years is “growing a cover crop for forage.” If that is the case, then the question becomes “Are all forages cover crops?” I think we need to better define “forage cover crops” – as “in addition to producing forage” also being grown with the intent to promote soil health, reduce soil erosion or provide other agronomic perceived benefits. This may require managing the forage cover crop differently than if it was solely grown for forage purposes.

For example, with a forage cover crop this might mean leaving more crop residue after harvest to reduce soil erosion and capture more precipitation or grow a broadleaf in a traditional grass-only cropping system to increase diversity and weed control options.

A long-term cover crop study was initiated in southwest Kansas near Garden City in 2007 to compare growing a cover crop (left standing) or forage cover crop (hayed) to no-till fallow ahead of winter wheat in a wheat-fallow crop rotation. To our knowledge, this is one of the oldest existing cover crop studies, particularly in a semi-arid environment (19.2 inches precipitation and 70.3 inches open-pan annual evaporation). 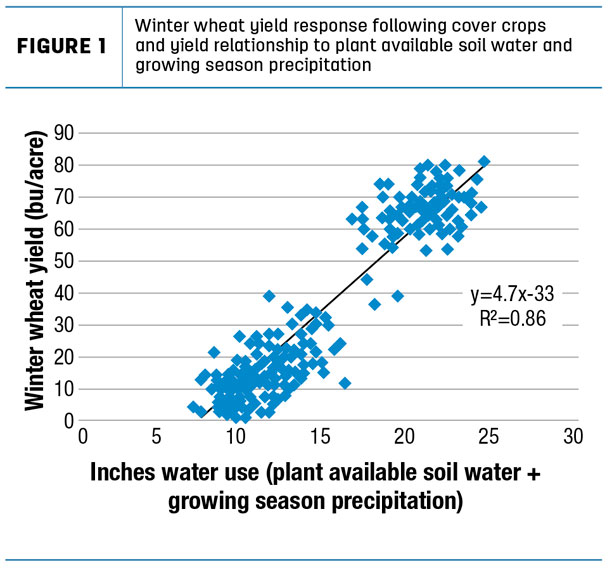