By Jamie Keyes, a freelance writer based in Utah

PROGRESSIVE FORAGE GROWER – Across the nation, farmers are using different practices to care for the land and harvest healthy crops. One particular Kansas farmer found a new way to improve the land, and the idea is catching on.

The third-generational farm has always grown common grain crops such as corn, wheat and beans, but Stigge introduced another purpose for growing crops. For the past eight years he has been practicing what he calls “graze cropping.” 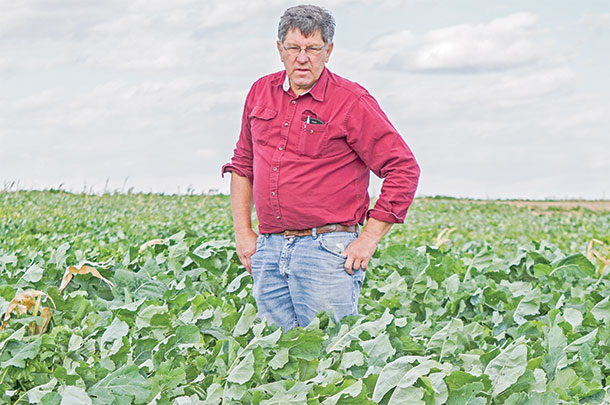 Stigge coined the term to explain this new angle of farming. In lieu of planting a field for grain production, Stigge plants cover crops and then puts cattle out to graze for a whole production year, and sometimes even longer.

Stigge and his sons operate multiple farms near Washington, Kansas and, according to Stigge, this new practice of graze cropping has been an exciting adventure as well as beneficial for the farm land.

“I started calling it graze cropping because it is different and it puts people into a different frame of mind,” Stigge says. “It opens up a whole new avenue of income.”

At first, Stigge’s only purpose for cover crops was to stop erosion.

“By using cover crops I was gaining tangibles that led to higher yields,” Stigge says. “I became convinced that if I took some of my land out of production, planted certain cover crops, I could accelerate the depths to my soil.”

PHOTO 2: A polywire fence divides the pasture into strips and is moved daily, along with the watering tub. Note the grazed area from the previous day’s grazing in the background. (courtesy of John Stigge)

Things changed when he realized the value in allowing cattle to graze the cover crops. Stigge believed the market for grass-fed cattle was too good to pass by.

“I saw that where I grazed I was improving my soil faster and that was one of those big ‘aha’ moments,” Stigge says. “Then I progressed when I analyzed the returns on the investment and found out that I could make more money grazing than I could farming some crops.”

Now Stigge and his sons rotationally graze 140 cow-calf pairs on 1,800 acres of cover crops. Extensive planning goes into the grazing. The process involves more than just opening up the gate and herding them in. Because of Stigge’s innovative spirit, he tries to plant five new cover crops a year to figure out which ones are most successful and which ones get the cows’ attention.

“We are growing a grazing product and we have to look at it like that,” Stigge says. “For instance, if I am going to ‘graze crop’ for a year, I’ll want to have something planted early for spring grazing, and once that has taken off, I’ll plant something else for the fall grazing.”

When Stigge plants grazing crops, he tries to seed at least one grass, one legume and brassicas. Some common crops he seeds include annual ryegrass, barley, oats, bayou kale and hairy vetch.

“Each crop serves a different purpose,” Stigge says. “The cows just love it.”

In the past, Stigge tried a 15-seed type mix but it did not work in his favor. He believes a two- to five-seed mix is the most successful.

“When I was watching the cows graze one of these mixes, it is interesting. They take a couple three bites out of the oats, and then they search around for the kale and then they come up with one of the vetches,” Stigge says. “It’s just like they are balancing their ration out.”

Because Stigge is working a way to cut out all chemical use on crops, graze cropping has been an effective alternative. The practice has also had a great effect on the soil.

“What I am trying to do is alter and do away with the use of chemicals and rely on natural predators to do their job,” Stigge says. “So far we’ve been very successful with that.”

Stigge says the reason is unknown why ruminant grazing on cover crops increases soil health. Stigge’s main goal has always been to have a healthy and robust soil that can withstand drought and be strong underneath the surface. So far, graze cropping has been a successful solution.

PHOTO 3: Stigge says the broadleaf plants germinated and grew when it was too dry for even volunteer wheat to sprout. (courtesy of John Stigge)

According to Stigge, some soil scientists believe when animals tear the top off a crop, but leave the root, the dead root matter then provides a great environment for regrowth and soil biological activity. Stigge also says scientists believe when cows chew their cud the liquid drips down from their mouth and inoculates the soil.

“We just touched the tip of the iceberg in knowledge to know all that is going on,” Stigge says. “What is most important is to develop a root system to get better water infiltration into the fields.”

Since Stigge and his sons started graze cropping, their cattle herd has significantly improved.

“We’ve had some very outstanding yields,” Stigge says. “We’ve gone from under a pound of average daily gain, to over 3 pounds.”

There are no such things as corrals for the cattle at the Stigge farm. The cattle spend all of their time on the farm fields grazing. On some farms, cattle are a last resort after harvest, but not to Stigge; cattle are the first priority.

“A tendency for people is to put cattle on last and let them scavenge for whatever they can,” Stigge says. “But in doing so, you lose the potential for your cow herd and your graining operation.” FG