Agronomy and nutrition in cover crops

PROGRESSIVE FORAGE GROWER – The use of cover crops in commercial crop production systems has grown exponentially over the last decade.

The idea of using “greenchop” to control erosion has been expanded and improved to incorporate many different species of plant cover to serve a variety of different purposes. Traditionally, cereal grain species such as oats, rye, wheat or barley were the cover species of choice, largely because of their availability and reasonable cost.

Although the primary objective was growing additional forage, soil protection, weed suppression and nitrogen recycling were added benefits. Oftentimes, however, that was the functional limit that cereal species could provide in a cover crop situation.

In the north-central region of the U.S., cover crops are primarily used in corn-soybean-cereal grain rotations. Operations with livestock generally are interested in not only the soil health aspects of cover crops, but also the forage production. In cereal grain, corn or sorghum silage production, chopping the cover crop for wet feed or grazing are the most common forms of harvest.

Although some certainly put up dry hay if possible, that form of forage harvest is more common in the western Great Plains. In areas where fewer acres are committed to cereal grain production, cover crops may follow corn or soybean harvest where a small amount of very high-quality vegetation is expected to improve the quality of the crop residue, which is then grazed by beef cows over the winter.

There are many vegetation species that can be used in a cover cropping system. Among crop and livestock producers, the term cover crop has become almost synonymous with the brassica species: turnips, radish varieties and several brassica crossbreeds such as Hunter, Winfred and Dwarf Essex Rape, to name a few.

However, traditional cover crops such as the cereal grains and summer annuals are still a very important part of the cover crop matrix.

Additionally, annual grass species, both traditional and improved varieties, are becoming more popular in cover cropping systems, especially among livestock producers. Annual and Italian ryegrasses, as well as the warm-season teff grass, are popular components of cover crop plantings that will ultimately be harvested for use by livestock.

Cover cropping strategies will differ depending on the class of livestock that ultimately will consume the forage. In the case of mid- to late-gestational beef cows that do not require the high nutritional quality of growing cattle or lactating cows, acceptable performance is categorized as maintenance-level, and cost is the primary driver of cover cropping decisions.

As with most forage species and mixes, crop yield has the principal impact on cost per unit. However, when analyzing the true costs within the system, it is important to derive the costs of the most economically significant unit.

In most cropping systems, cost per acre is viewed as the primary cost-based derivative of the system. However, when the crop is feeding livestock, cost per unit of production and cost per unit of livestock become more tangible estimates of economic efficiency. Table 1 demonstrates the yield and costs associated with grazing four different cover crop mixes with mid-gestational, Angus X cows.

Cow performance, measured as change in body condition score (data not shown), did not differ for any of the treatments. The principal take-home point is to notice the difference among cost per acre, cost per ton of forage and cost per cow per month.

Although the initial establishment cost of these forage mixes seems substantial, three of the four exceeding $100 per acre, the cost per ton and cost per cow per month make them seem much more economically efficient.

Obviously in this scenario, the higher yields of the brassica-rye and brassica-millet mixes provide more units of forage to divide the establishment cost over.

When grazing or feeding growing cattle or lactating cows, however, effects of the forage on performance becomes one of the primary foci, as well as cost. Most cover crop species are relatively high-quality forages in terms of crude protein concentration and digestibility.

Table 2 summarizes a study conducted in central South Dakota where a brassica mix, a cereal species and a summer-annual species were grown in monocultures and in mixes to demonstrate the impact that the very high moisture content and digestibility of brassica species has on the performance of weaned calves.

As a result, the study showed that animal performance increased as more dietary fiber was included in the cover crop mix through the inclusion of either oats or millet.

Cold tolerance When incorporating a cover crop system into any forage or cropping system, there are a couple of other considerations that should be taken into account.

Although these are more systems-oriented things, they are still extremely important management items to return a consistent forage quality and quantity from both the cover crop and the cash crops in the system.

Cold tolerance of cover crop species is paramount when selecting species for either a cover crop monoculture or mix. In the north-central region, a relatively short growing season means cover crop species that are going to be used for forage or grazing later in the season will be subjected to low temperatures and likely light frost at some point during their growth cycle.

Conversely, summer annuals will not withstand even a light frost and will cease growth when temperatures fall below 60ºF. As a result, a cover crop system should take this into consideration to ensure that planted species will meet management objectives.

Cover crop residue Another critical consideration from a systems standpoint is residue management of cover crops in grazing. In many instances, grazing large forage-yielding vegetation is not very efficient, and the more rudimentary the grazing system in which grazing pressure is applied, the poorer the grazing efficiency.

Figure 1 demonstrates the harvest efficiency, a proxy measurement for animal intake, and forage wastage of nine different species grown in monoculture and grazed for 45 days from Sept. 1 to Nov. 1 by mature Angus X cows. 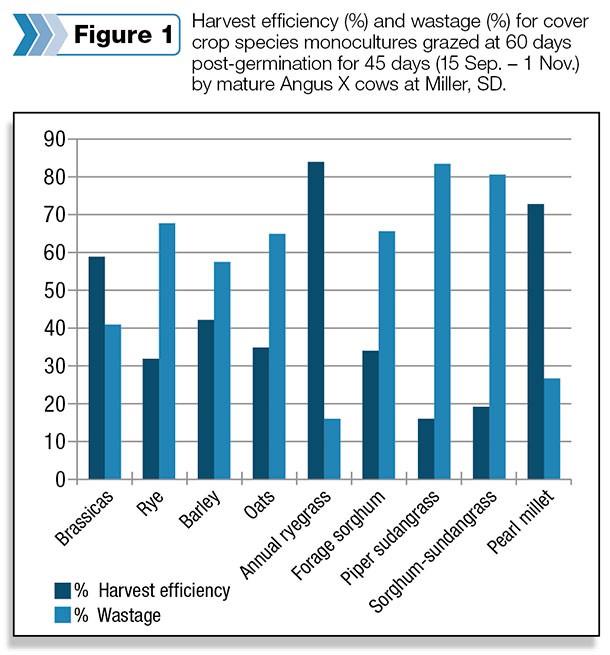 Level of harvest efficiency is heavily influenced by vegetation type. Harvest efficiency of brassica species, annual ryegrass and pearl millet was 60 percent or greater. Harvest efficiency of the cereal species, forage sorghums and sorghum-sudangrass was less than 40 percent. The significance of this is the impact large amounts of cover crop residue will have on agronomic and management implications for the subsequent crop.

Producers generally assume that grazing will remove most or all of the vegetation residual and little residue will be present when preparations are made for the following crop.

However, this is not always the case, as tremendous amounts of ungrazed residue may be present following grazing. Therefore, it is paramount that cover crop systems consider species, harvest method, stocking rates and forage yields when selecting the most appropriate species or mix of species to address cover crop residual.  FG

By Eric Mousel, a Cow-Calf Management Extension Educator from the University of Minnesota