This year the majority of the U.S. has welcomed much improved pasture and range conditions. Conditions are measured by the percentage of a state’s total pasture and rangeland rated as very poor, poor, fair, good, or excellent. These values are reported weekly by USDA-NASS in the Crop Progress Report, and tracked by LMIC. The total of very poor and poor percentages are the measurements monitored and compared on a year-to-year basis. 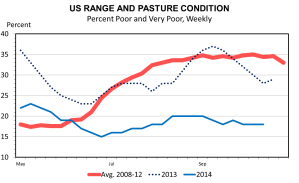 Looking at the U.S. as a whole, current conditions for the second week of October are the best they have been since 1996. The percentage of pasture and rangeland rated in very poor and poor condition was reported at 18% as of October 22nd, compared to 28% last year and 35% for the five-year average.

Since June, the Great Plains, Southern Plains, and Corn Belt regions have all experienced significantly smaller percentages of very poor and poor pasture acres this year compared to their respective 2013 and five-year average. The Southeast region conditions are sitting at 15% of pasture categorized as very poor and poor, which is between more favorable range conditions of 2013 and more severe conditions reflected in the five-year average. The Northeast region has recently started tracking above their five-year average, currently reporting 22%. As for the Western region, most of California ranks in the most severe U.S. Drought Monitor categorization, D4 – Exceptional Drought. Parts of Oregon, Nevada, and New Mexico are categorized as D3 – Extreme Drought. With this, the Western Region has been tracking around 35% of total pasture land categorized as very poor and poor, up from a seasonal five-year average which starts May out just under 25% and peaks in October around 42%.